The star of the show

It is all about Avon, after all.

Today we let him visit the Grand Canyon Kennel for a spa day while we hiked the rim trail.  Not because he’s a hassle on the trail – he’s a trooper.  And not just because we would be slowed down because he needs to sniff everything along the way and pee on every available tree – you can always drag him by the leash until he settles into a walking gait.  The reason Avon is a hassle on the trail has to do with the other hikers’ reaction to him.  Is he a pit bull?  Is he purebred?  Can I pet him?  Yesterday on the trail a couple of young ladies from New Orleans not only wanted to know all about him and pet him, but have their pictures taken with him.  We’re thinking about getting him business cards. 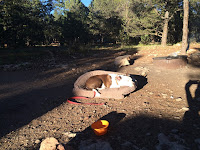 We camped two nights at the Grand Canyon.  Avon thinks all this outdoors is OK, but at heart he’s a city dog.  The smells are interesting, but when 12-point buck elk walked through our campsite around dinnertime yesterday, he just looked up from his dog bed – his dog bed, not the ground – with only mild surprise. 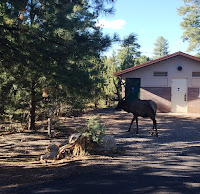 Night before last in the tent he was pretty sure he was supposed to be on the air mattress instead of his dog bed, so when I turned in I had to push him off my sleeping bag several times before he got the message. Last night he slept in the van.  We were all happier.

He still seems to believe that Deke is abandoning him any time he disappears for whatever reason.  Yesterday I had to do my Avon-calming routine when Deke went off to fetch coffee.  Again last evening when Deke and Teddy went into the store to provision us for dinner, I stayed with Avon and was pulled through the parking lot until I made him understand he can’t go into the store and would have to look for them standing on the bench outside.

But he’s been great in the van.  Hops in whenever the door is opened, moves to his dog bed in the back when he realizes he isn’t going to be able to sit up front (this happens every time, of course), lies quietly until he senses that we’re going to stop and then jumps up to take a look out the window.

Don't tell Deke, but I'm going to miss him.