Should have known better

A couple of posts ago I was smugly reporting on our trouble free trip.  Maybe I did jinx it, because this afternoon, tooling along at 70, I felt the car run over something.  I was sure there was nothing in the road, but didn't think much about it until we stopped for gas and discovered that a piece of the lower right front end was missing.  Now, that part of the car was already held together with black tape, the plastic bumper having been torn up a while back.  Looks like with the combination of heat softening the tape and the wind pressure of 1300 high speed miles, part of it finally gave way.  What's left of it is somewhere beside the highway in Oklahoma. 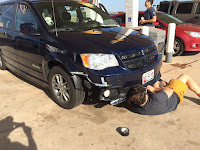 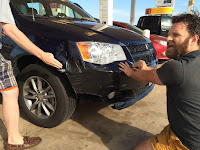 Luckily, Deke has a roll of strong black tape, so we fashioned a temporary fix.  Doesn't look half bad, actually, and will probably be more aerodynamic than the part that disappeared.  Chalk one up for the pit crew, putting us back in the race in no time.

We also encountered our first construction zone that slowed up to 55 for a couple of miles, and drove into Amarillo looking at an ominous black cloud coming up from the southwest.

Didn't have to drive in it, though, as the rain hit just as we were pulling into the Days Inn.  The rooms have analog TVs with dubious signal strength, but that's no big deal.  Not as bad as back home where the Nationals-Dodgers game was delayed a long time and finally had to be suspended because a bank of lights at the ballpark kept going out.

Poltergeists?
Posted by Dan Shipp at 11:41 AM