In Memphis there's a giant pyramid on the riverfront.  Used to be an arena for sports events, concerts, etc.  Then the teams left, it sat empty for a while, and now it's an enormous Bass Pro Shop, with a hotel and a restaurant and bar at the top accessed by a $10-round trip elevator.  That's where we wound up on Wednesday evening, one of the highlights of a personal tour led and driven by Deke's friend Brown who's a native Memphian.  You could walk out on the deck and look to the north or west, or sit at the bar and watch a gigantic catfish swimming in the cylindrical tank. 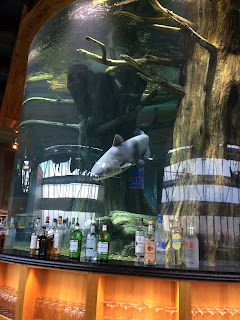 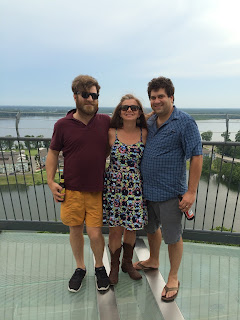 Our first stop was the Cozy Corner for some fabulous barbecue - ribs so tender the bone was soft, wrapped in a mild sauce that still had some kick and loads of flavor. Cornish game hen on a barbecue menu?  We then got a personal tour of Willie Mitchell's Royal Studios, a soul music landmark, where Al Green and other stars have tracked hits. This was our second studio visit in two days - on Tuesday we toured RCA Studio B in Nashville. After an obligatory walk down Beall Street, we headed for the pyramid, and then caught a live set at the Lafayette Music Hall.  It's great to see a place like Memphis with a native, who showed us the neighborhoods and parks as well as the tourist sights...and areas to avoid.

People are really helpful here.  When we spotted a parking place at a meter on Beall Street, a guy stood there on the sidewalk gesturing as if it was his spot, and he was generously offering it to us.  We figured he was looking for a buck.  When we got out of the car, he suggested that $5 was appropriate for his assistance.  Inflation is affecting everyone's business.  We compromised.

Thursday we'll do the pilgrimage to Graceland, but so far, Elvis appears to be less of a presence here than he was in Nashville.  In our hotel there, the photos on the wall in the lobby were head shots of the King, like Joe Biden in the post office or Kim Jong Il everywhere.  At RCA Studio B, we were invited to commune with Elvis' ghost as the lights were dimmed and the master tape of "Are You Lonesome Tonight" played to recreate the 4 a.m. recording session there.  The piano, we were told, was Elvis' favorite (Chet Atkins wouldn't sell it to him, though).  His Cadillac with gold door handles and 40 coats of diamond-dust-and-fish-scale paint is in the Hall of Fame.  Here there seems to be more celebration of the blues - more Stax than Sun, more river than hillbilly.  Come to think of it, from the top of the pyramid you'd look to the horizon without seeing a hill.

Driving so far has been easy.  Soon we begin the long stretches until we get to Santa Fe.
Posted by Dan Shipp at 8:52 AM